Is That A Quiver On Your Back, Or Are You Just Excited To See Me?

Most of all, I love the license they take.  Hollywood looks at an old legend, say William Tell, and thinks, “Ooo, what if instead of one crossbow, he had two?  And what if they shot flaming arrows?  And what if, instead of his son he had to save a busty, scantily clad and mostly mute damsel in distress?  Now there’s a movie.  Get me a director!”

It is most likely thanks for Hollywood (and Professor Tolkien) that I developed a love-affair with archers and archery.  Errol Flynn was my first introduction to the fable of Robin Hood, and it couldn’t have been better.  The Adventures of Robin Hood is classic, iconic Hollywood in all its glorious Technicolor.  It’s the epitome of dashing heroes, beautiful heroines, dastardly villains and sword-waving, arrow-shooting awesomeness.

Of course, three decades of reading and writing and obsessing about archery have given me some insights into the many splendid anachronisms and failures that Hollywood has created, latched onto and never, ever let go.

Let’s look at just one example that you might not think about much: the archer’s quiver.

Because we’re talking Hollywood, and because most Hollywood archers tend to hail from Medieval Europe or a European-based cognate, I’m only going to focus on that.

Now, the quiver is a pretty simple and straight-forward device.  You’re an archer, you need to carry your arrows about, and holding them your hand is both awkward and leaves sweat stains on the shaft.  Not at all the kind of thing that a scantily-blad, buxom beauty would find appealing in her hero.  What’s a brazen archer to do?  Put then in a “holder”.  Leather is traditional, but quivers have also been made of wood and cloth.

Now, you’ve got your quiver, but you’re still carrying it around.  Sure, the arrow shafts aren’t all nasty with sweat, but it’s still cutting down on your ability to swing from chandeliers.  Solution: wear the quiver.

Here’s where Hollywood gets it all kinds of wrong.  A quiver slung on the back isn’t unheard of (Native Americans, African tribes, and the Japanese use back quivers), but for Europeans this just flies in the face of historical accuracy.  A quiver on the back does look cool, but if you’ve ever tried this (and I have) you immediately find a host of problems.  Just reaching the arrows over your shoulder by touch only seems to be a super-power in itself.
Almost all European iconography (tapestries, paintings and illustrations) show that archers wore their quivers on their hip.
Even this is a bit misleading, because the tapestries and whatnot are just general representations.  They aren’t a photograph.  We know from contemporary historians and piles of evidence that archers often used an arrow bag, like a giant quiver.  This allowed for them to be very effective in mass-fire techniques, shooting about ten to twelve arrows every minute.

So, while I’m a big fan of Legolas, Hawkeye, Green Arrow, and, of course Robin Hood in all his incarnations, it should be generally assumed that these are not overly accurate depictions of real-life archers.  They are Hollywood archers, which means they’re bigger, better, faster, stronger, more accurate, and able to shoot a Nazgul on a flying steed, out of the sky, at night, with a single, thin shaft.

True story.
Posted by RobRoy McCandless at 10:27 AM 6 comments:

Witches and Wizards and Shamans, Oh My!

With so many synonyms for essentially the same thing, a magic-user, it can be overwhelming for a writer to know just how to choose!  Spell-chuckers are great, because they bend and break rules that otherwise requires a Keanu Reeves-level of suspension of disbelief to occur.

Need a rainbow bridge to span a bottomless chasm to get to the treasure room on the other side?  That’s a job for an enchanter!

How about a bit of sourceless glowing to light the gloom of a dark labyrinth?  Lumous!  A kindly wizard will guide your way.

How about asking a pile of bones the blind spots and safety points of a lair so your ragtag band of heroes can tiptoe past a sleeping dragon and through the Portal of Times?  Necromancy is your goto house of magic!

Really, spell-chuckers can be called whatever the writer wants them to be.  Names can be important, especially to give the story a bit of flavor for the archaic.  But really a magic-user by any other name would still defy the laws of physics.

Still, it might help to have an etymological/traditional breakdowns of some of the major power-wielders who hang out at the docks, waiting for a quest:

Witch is taken from the Old English wicca for a male practitioner of the magic, and wicce for a female. In modern use, "witch" is for female magic-users and "warlock" for males, but really there's no difference.  They both need weigh less than a duck and need to be burned at the stake.

Wizard is from Middle English "wys" meaning "wise" and "ard" meaning "art".  Those clever junior high classes!  At one point a wizard was considered someone (usually a man) very learned in a vast number of studies, such that he (bastard) probably seemed to have (or claimed to have) magical abilities.  Really, what he (bastard) was just blinding the unwashed masses with SCIENCE. 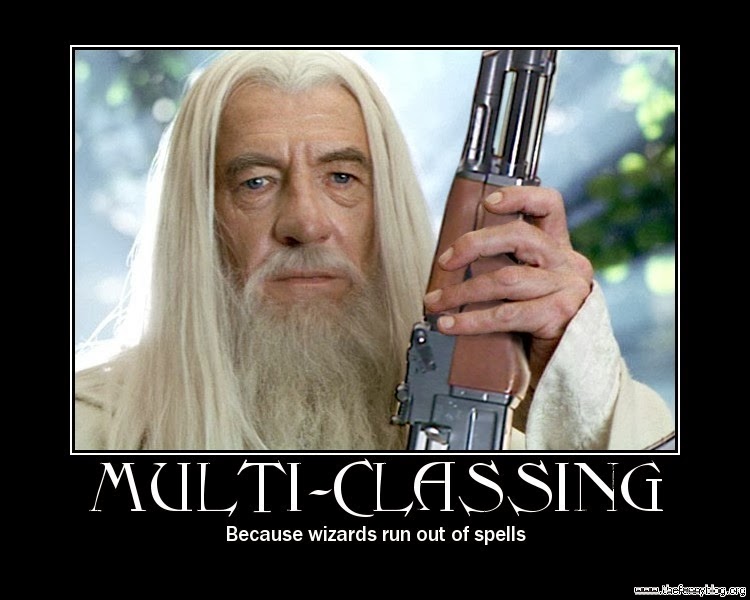 Magician comes from the Greek "magos" and Persian "magush" as priests, by definition, have power derived from the gods/goddesses. This developed into the Latin "magus" (singular form) and "magi" (plural), and later dropped the religious aspects except for that O. Henry story where the wife totally pulls one over on her husband.  Hair will always grow back, you fool!

Sorcerer/sorceress is derived from their use of "sorcery" (obviously) which comes from the Latin "sortiarius", specifically someone who tells fortunes from lots.  Not the vacant kind, but the ones you would cast made from sticks, bones, bits of rubbish.  Whatever. Because of the use of other powers then the Christian god, sorcery generally has negative connotations, which is why today David Copperfield is called a “magician” and not a “sorcerer”.

Shaman is actually a Russian word, which was derived from the indigenous people of Siberia.  It means “to know” which seems to be a running theme with all our spell-chuckers.  These folks are thought “to know” more than the average citizen about the natural world and the spirit world.  Basically, they know what the seven herbs and spices are in KFC’s secret recipe.

Necromancer is actually one of the easier ones, which may or may not gross you out.  It comes from the Latin necromantia, which means “divination from dead bodies” which comes from the Greek nekromanteia, nekros meaning “dead” and manteia meaning “divination”.  Pretty straight forward.  If it’s dead, these folks have power over it.  Which does nothing to explain the Necromongers from that Riddick movie.

Obviously, that’s not all the types of magic-users available.  There are alchemists and prophets and druids and wandering Hobbits with Rings of Power around every corner.  There are aes sedai and avatars and sympathists from The University.  There are rune masters and shadow lords, sun priests and Gaians.  Masters and apprentices of magic practically fall out of any tree shook hard enough.

That’s what makes it all so much fun.
Posted by RobRoy McCandless at 3:00 AM 2 comments:

There is a fine line between a writer and an author.

A writer puts pen to paper (or fingers to keyboard) and crafts stories from the waves of inspiration, slammed upon him or her by the muses of creativity, who buffet their fragile forms with an inescapable and relentless parade of plots, dialogue, characters, and exposition.

An author gets paid.

I regret to inform my friends and family that I am not longer a writer.  I am an author.  I am receiving what are technically “royalties” but what would otherwise be considered a rounding error to most other authors.

Still, a check is a check.  That’s inspiration right there.  If by “inspiration” you mean “beer money”.

I love me some beer.
Posted by RobRoy McCandless at 10:25 AM No comments: