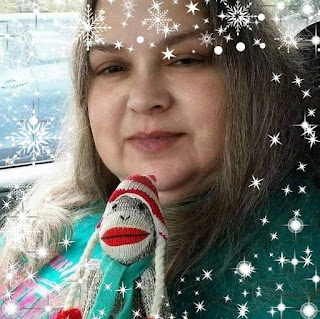 True to form, and only as Shawn would have had it, this memoriam went through several false starts, drafts, and not nearly enough editing.

In the writing industry, you get to meet some really interesting people. Some of them, you’ll click with, and even if you don’t become BFFs, you’ll at least have a friend or acquaintance for life. If you’re really lucky, you run into someone like Shawn Rost-Howen, and you have a mentor, a teacher, an editor, and a dear friend all rolled into one person.

Shawn and I met over 20 years ago, on the now defunct forums of Writers-Write. There was a small but very active fantasy writers group, and it was my first experience ever really sharing and discussing with other writers the craft. Shawn was, by far, the most experienced of us, and she warmly and willingly shared her knowledge, even with people who were *cough, cough* stubborn and blinded by the brilliance of their own talent.

That’s something that always, always, always amazed me about Shawn. She was friends with everyone, and even if she had an argument, she never (or at least almost never) took it personally. Shawn was smart—MENSA smart—and witty. She also had a creative streak that ran a mile wide and deep. But she was never competitive. She truly believed that the candle that lights others lost nothing.

About a year after meeting, Shawn and I lost touch. This was before social platforms, and if someone misplaced their links or got an email address wrong, that was pretty much it. Later, I learned that Shawn had done some internet searches and came across my name in an obituary. She thought I was dead. When I reappeared she was certain I was someone playing a weird prank. but after we sorted it all out, we were overwhelmed with joy at the reunion.

That reunion, above all, epitomized Shawn and her relationship with me. Immediately, she asked if I was writing anything, and let me know she was editing at Wild Child Publishing. I’d actually just finished writing a book, and she asked to see it. That was, as they say, that.  Shawn essentially, and almost single-handedly, kicked open the publishing door and shoved me through.

She was also a brilliant author in her own right.  Her “Medicine Man” won awards and sold reasonably well. The series remains one of my favorite horror/alt-history concepts, something I wish I'd written myself. I always wanted to know what would happen in the last book. For the last two years she'd been working on a huge epic, lots of characters, millions of words. It was the thing that drove her.

Shawn was many things to me, and I will always be grateful for her kindness and patience. We knew each other for better than 20 years and we worked closely on every project I published for the last 10 years. But most of all, Shawn was my friend.  Through thick and thin, through success and failure, we talked constantly. If not every day, then at least once a week. It was when I didn’t hear back from her that I knew something was wrong. Shawn had fought for years against failing health, though she had fought brilliantly throughout that time. She told me in October: “I've been type 1 diabetic over 50 years it catches up with you. Not many make it past the 50th anniversary from diagnosis.”

Tell her the odds and she’d set out to break them. Shatter them. She made it her personal mission in life. I still can’t believe she’s gone. I expect to find a message from her waiting for me.  It took me some time to pull this final draft together, and I’m certain she’d say, “Well, it’s a good FIRST effort. Let’s see if we can make something out of it.”

I miss you Shawn. Thank you for everything you did for me, and so many others. 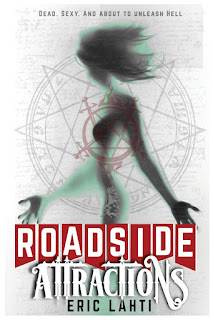 It shouldn’t be a secret that Eric Lahti has some writing chops and an imagination to boot. Diving deep down the urban fantasy hole, Lahti has arisen again with a new set of characters to rival his HENCHMEN series. In ROADSIDE ATTRACTIONS we’re treated to ghosts, ghost hunters, demon hitters, Satanists, rogue demons, and the titular roadside attraction.

Dragoon, Arizona a dusty, dirty backwater that has exactly one claim to fame with its tourist trap attraction is the setting that brings Jennine, a less-than-enthusiastic ghost, Char and her guy-Friday Jordan, two ghost hunters, and the demon assassin Lilith to town. It seems like too much, but Lahti deftly weaves together a story of betrayal and loss older than time that culminates in a battle for the very soul of the world.

Followers and new readers can come to this latest book with fresh eyes to look at Lahti’s dirty old world that still hasn’t told all it’s stories. There’s always the fun, frenetic pace of the characters’ witty banter, and a plot that grabs you and shakes you for all your worth. Fans of urban fantasy and especially “Supernatural” will definitely enjoy this ride.

Posted by RobRoy McCandless at 1:21 PM No comments:

The Spirits Have Spoken—Medium Has Become A Thing

I'm not moving to medium—yet—but I'm definitely there.

Medium.com is an online publishing platform, almost like a blog, except if you get enough reads, you get paid some money. I started this blog as an active and ongoing update of my journey as a writer and published author. I’ve also used it to curate information and arguments that I found relevant.

Some of the entries here can even be cleaned up and presented to a wider audience with the hope of turning advice and experience into a little of the cold, hard, spendable stuff.

The only downside is that, unlike this blog, Medium exists mostly behind a paywall. That’s what allows them to pay writers (like me) and in some ways it helps push authors to become better at their craft.

I hope that you’ll follow me over to Medium, but I totally understand those who are uninterested in it, or simply can’t afford it.  I’ll still maintain this blog for the foreseeable future, and post updates on my works, so don’t feel like this place will become abandoned.

It would just be nice to get paid a little for all the writing I’ve done outside of my stories. With any luck, you’ll also see a higher quality of article from me (and perhaps you’ll see others that you enjoy as well).

Give Me and Medium a Shot!

Posted by RobRoy McCandless at 3:35 PM No comments: