To Writer or Not to Writer


Are you a writer?  A new writer?  A stay-at-home or write-on-the-weekends writer?  Do you write?  Perhaps, even an aspiring writer?  The following is aimed at you, but you shouldn’t take it to heart.  Its heart is in the right place, even if its final message if an utter train-wreck: 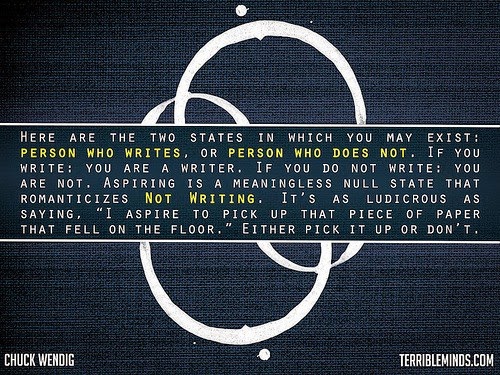 The idea is simple.  If you write, then you’re a writer.  There’s no need to caveat your title as “writer” with something that dilutes what you are.  That part is fine.  Even being admonished to call yourself a writer rather than a [insert-something]-writer is reasonable advice.

But the argument this meme-thingy uses to support itself is fundamentally flawed.  It's a lengthy way of Yoda-ing, “Do or do not. There is no try.” When, umm, yeah, actually, there is a try.

There are several tries.

Sure, simple goals are attainable.  Pick up a piece of paper.  No problem.  Now put it in the trash.  It’s a two-step process, but you get the idea.  For most people not reenacting scenes from 50 Shades of Stupid there’s not much “try” in that.  But lets add some steps—crumple that piece of paper and shoot it, basketball style, off the frig, over the two year old, around the sink and into the trash (nothing but liner) and suddenly there’s a whole world of try.

That’s the reality of what it is to be a writer.

There are nearly as many books, articles, and advice memes on how to write as there are actual books written.  More join the ranks each year as “new” and “different” experiences are had by aspiring writers the world over.

That is the point.

So calling yourself an “aspiring writer” actually does mean something, and it means something accurate.

Aspire means to seek ambitiously, to be desirous, especially of something lofty or highly valued. To ASPIRE to be a writer is, to quote the poet, “To strive, to seek to find, and NOT to yield.”  The Beatles didn’t leap from the forehead of Zeus fully-formed.  They required ten-thousand hours playing in dives.  Stephen King wasn’t born Stephen King (he was born Stephen Edwin King)—he had to write for years and years before he sold anything.

He certainly aspired to be a writer, even as he was writing.  It’s a good aspiration to have.
Posted by RobRoy McCandless at 10:33 AM No comments:

Of Interest - Rob as Writer


I was nominated by SK Delph a few days ago to list seven things about myself as a writer that most people don’t know.  Since I’ve been heavily active marketing over the last two years, there’s not much that folks who follow me don’t know.  But I came up with a few things:

1. My first “book” was actually culled together by stolen pieces from other authors.  It disappeared, and that’s a good thing.

2. In high school, I was introduced to the “coldest haiku ever written”.  I then set out to write one that was colder.  I have no idea where my poem went or who wrote the one that inspired me.  I got an A on the project.

3. Despite being a solid fantasy genre writer, my wife thinks that I write better romance.  She constantly urges me to write more relationship/love stories.

4. I love the true steampunk aesthetic (as opposed to female models dressed in skimpy/revealing clothes and a pair of goggles).  If you ever feel the need to prove yourself, something from the Datamancer collection would cement us forever.

5. Almost every name of a main character or place has meaning.  If you can figure it out, you’ll know about a plot-twist or upcoming event.

6. I’m very concerned about the logic of my plots.  So much so that I enlist specific beta-readers to challenge the way the events go down.  I’m willing to rewrite whole chapters, or vast sections if the logic doesn’t work.

7. I like to drink a 44 oz Dr Pepper from the Circle K across the street.  I do this almost unconsciously as I write, to the point that I won’t even realize it’s empty.  I’ll attempt, three or four times, to take one more drink before I recognize that I’ve had my last some time ago.

Thanks SK.  This was a lot of fun!
Posted by RobRoy McCandless at 3:00 AM No comments:


As promised, I’m providing more content.  This is from the upcoming Hell Becomes Her, the next Del novel.  This is deep into the book, Chapter 10—Situational Positioning:

Del, Karl and Arvid moved fast.  Their boots pounded on the concrete floors, and echoed down the corridor to Turbine Room 3.  The creature, seven feet-plus tall, grey flaking skin and leathery wings, had passed in front of the security camera on the main floor.  Arvid had assured Del there was only one way in or out of the room, so long as they got their in time, and the view was from one of the furthest sections of the room.  The creature didn’t seem to be in a hurry.
Del had warred with herself whether or not to go back and get the other team so that their numbers would even the odds.  She’d cursed the fact that the radio was useless to her through so much rock.  Arvid had tried the direct phone line, but no one had picked up in the other control room.  Marrin had likely moved his team out and begun the slow, painstaking and nerve-racking process of clearing his half of the entire complex.  Trying to find them now would cost Del the advantage.  She knew where the creature was, and she could plan an attack.  If she took the extra time, the creature could be anywhere when they returned, even in the control room.
Ragnar, his team and their demise was an object lesson.
Sun Tzu discussed ground in intimate detail—the general who could choose the battlefield was the one most likely to win.  Confronting the creature on its own terms, in a standing fight, was just shy of suicide with the same end result.  If Del could get into Turbine Room 3, and pick the place, she’d have the advantage.  They wouldn’t have to go toe-to-toe with something that took out six trained and very capable soldiers.
All warfare is based on deception, Del told herself.  It doesn’t know we’re here.  It doesn’t know we’re coming.  It doesn’t know our numbers or that I’m here.
Del hoped being Nephilim wouldn’t make the difference.  She’d rather not be the dividing line between living and dying today.  A face-to-face with the creature wasn’t high on her list of things to do.
As they came to the end of the corridor and the security door with Turbine Room 3 spelled out in white on a red plaque, Arvid moved directly to the keypad.  Again, he pushed in more numbers than Del had a mind to count.  There was no sound from the door, no click suggesting a lock had removed, but Arvid gave her a nod.  She gave them the two men the same motions for the sweep maneuver they had done on the control room, soft-checked the door, and pushed.
The room beyond was dim and mist-filled.  Not smoke.  Del could breathe easily and it smelled of ozone and sage, like the rest of the geothermal complex but much more strongly.  Del had a hard time making out the details of Turbine Room 3 through the white fog.  She swept in, as she was supposed to, doing her job.  She was just going through the motions.  If the creature was more keen-sighted than a Nephilim, it already had the advantage.  Karl moved behind her, but she could hear the hesitation in his steps as he encountered the white mist.  Arvid stayed at the door where the light fell into the room and cast a diffused triangle into the room.
Del tried to peer through the white fog as her mind raced.  She could make out vague forms at six feet, but beyond that she might as well have her eyes closed.  This was nothing like they’d seen on the security cameras.
She made a decision.
“This is bad,” Del said.  “Karl, back out, now.”
“Moving,” Arvid said.
Del froze.  It was what she was supposed to do when a team member in a sweep and clear indicated they were moving.  She should stop what she was doing and look for immediate danger to the mover.  Her mind caught up a moment later.
He shouldn’t be moving at all, she thought.

I did that too.  Blogging, I sorta get.  Back in the way back of the early ‘90s, I followed an internet friend’s blog religiously.  It was filled with heartache and longing and pain and desperation.  I’d never really encountered someone so willing to share so many intimate details of thoughts and feelings and emotions.  It was enthralling reading.

Now, of course, it would be considered common-place.  Mundane.

But I linked my blog to my Twitter to my Facebook.  How I did that, I can’t recall.  I probably could not repeat the procedure, or undo any part of it should the desire/need arise. 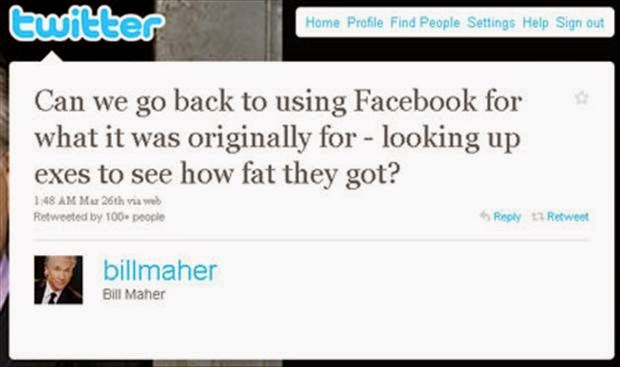 So I started doing that.

Now, I tweet anything that tickles my funnybone.  Some is thoughts that occur to me.  Some  is stuff I’ve heard or seen or read.  Some of it I think I actually made up, but I’m probably stealing from somewhere else out to the recesses of my semi-functional brain.

I have a 165+ followers, so I guess I’m doing something right.  Every few days, another someone I’ve never met, and never heard of, follows me.  It’s deeply appreciated.  Anyone who finds my blog-Twitter-Facebook-linked material worthy of interest has my personal thanks.

I still don't get it, but please follow me: @RobRoyMcCandles