Anatomy of a First Draft


I’m working on a new short story that I haven’t quite titled yet (I have a working title, but I’m not liking it).  I was also wondering what to do for my blog.  Staring at the current draft, wondering how the whole thing is going to play out, I figured I’d share some of my process with you folk, and let you in on just how the “magic*” happens: 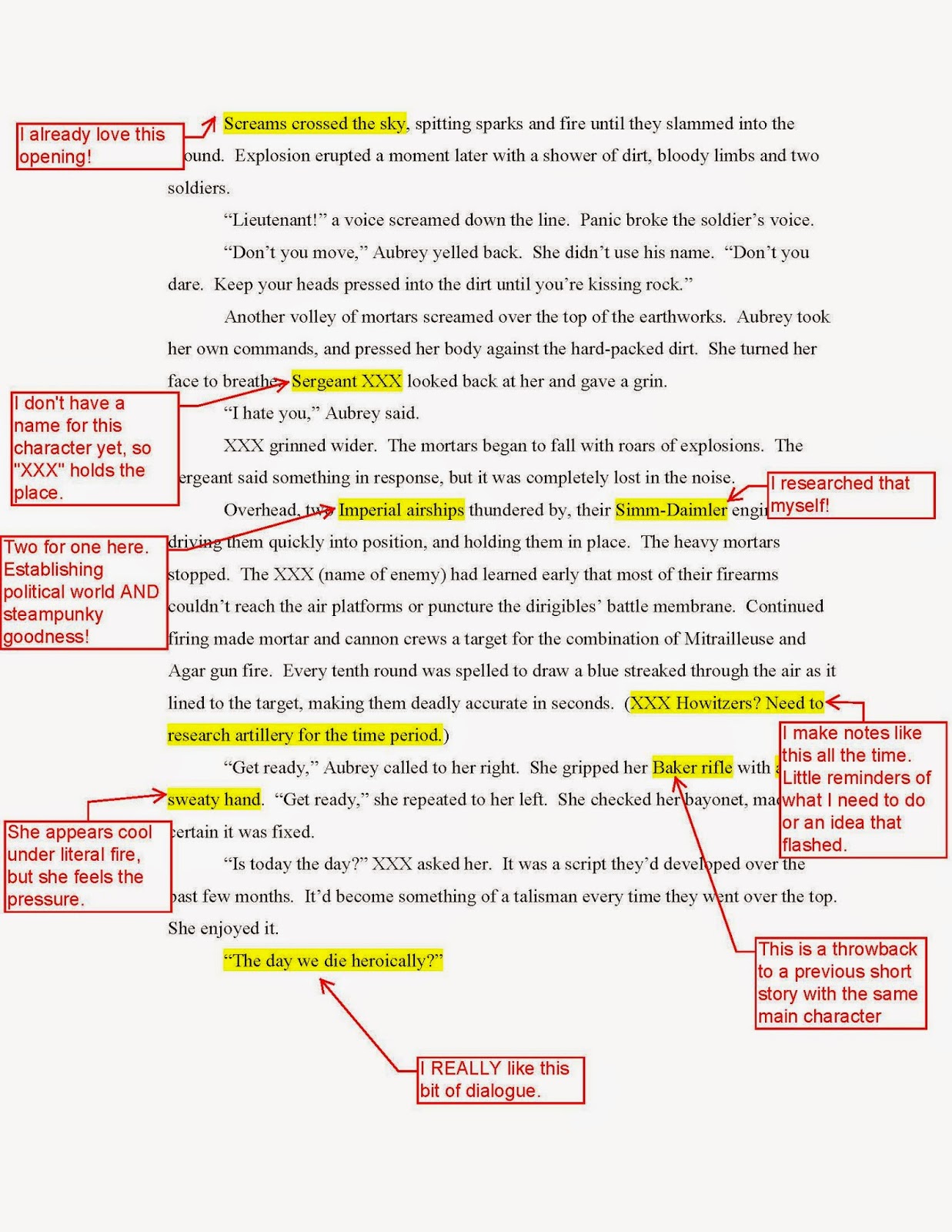 *No actual magic was used or harmed in the making of this draft.


Posted by RobRoy McCandless at 3:00 AM No comments:

I’ve never heard the term “angelpunk” before Ien Niven’s provided it in his review of Tears of Heaven.  It does what “urban fantasy” really can’t accomplish.  It’s so apt in describing exactly what Tears of Heaven is.  That shouldn’t limit the readership though.  This book isn’t all halos and harps.  It’s more firearms and hand grenades, with a few swords to balance everything out:

R. A. McCandless's badass demi-angel bears a grudge nearly two dozen centuries old. She makes effective use of her displaced aggression by dispatching rogue divinities, presumably making the world safer for the rest of us, albeit in ways we oblivious mortals will never fully comprehend or appreciate.

Omedelia-bar-Azazel, Del for short, is impressively sexy as a 21st-Century death dealer and as slave-wife to a swash-buckling, happy-go-lucky, Roman-era sea captain. Her roles confine her not at all, but her obligation to the Throne--a debt she has incurred through no fault of her own--renders her incapable of knowing freedom.

McCandless navigates an arcane range of settings, styles and sensibilities with convincing poise. If he skips over several centuries worth of rogue warfare, we understand that neither bloodlust nor addiction has ever done much to blunt the pain inflicted on Del's soul when she once sought to deny what she is in an attempt to lead a marginally more normal existence. Her story pivots on that pain, her darkness balanced by the equanimity of her deadly protege and sidekick, Marrin.

Tears of Heaven delivers enough controlled firepower to leave your ears ringing long after you put down this angelpunk thriller.

Mentioned in a Podcast!


The standard vision of a writer, as seen by non-writers:

A smoke-filled room, with a single, uncovered light bulb hangs down a line over a simple, worn table with a typewriter in the center.  Fresh paper sits to one side, an unruly stack of scorched and heavily marked sheets to another. A random fall of crumpled paper balls have been thrust away with extreme prejudice and frustration.  The writer might be swilling cheap Scotch from a bottle that is perpetually three-quarters empty (for you optimists: a quarter full), or chain smoking an obscure, likely foreign brand of cigarette that creates a miasma of yellow haze hovering just inside the cone of light that is both physical and mental.

The writer dwells alone in darkness.

But not really.  This was emphasized to me when a fellow writer mentioned me in his recent podcast.  Omar Khafagy and I had a brief exchange about a previous podcast.  It was actually a bit exciting to be named.  The podcast is pretty good too!

The ability for a writer to reach out beyond the cocoon of their own self-imposed exile is not only simple, but at times necessary, even mandatory, and definitely beneficial.

Veteran writers are so helpful:

They sit around a virtual campfire after a long bout of writing, mostly keeping to themselves, warmed by the glow of a couple CRT monitors stacked for warmth.  A few are sharpening a recent passage, working out the plot burrs, and filing out any wording nicks.  There’s always one harmonica player, keeping the tone both light and slightly depressing.  A newb, dressed in fresh-issued, still-creased khakis and a denim shirt, doe-eyed and eager will wander up, and ask a question of the collective group, eager to learn and join their ranks.  “Hey guys,” the newb says with a quick hesitant wave.  “How long should an average chapter be?”  The responses will fly, fast and furious.  “How long should a piece of string be?”  “How tall should a tree be?”  “Go away, newb, I’m writing!”

I’ve gotten a few questions from other writers about various elements, like crossbows, general archery, and castles vs. fortresses vs. palaces.  I’m not a historian, but I do love to research, and I attempt to make my writing generally realistic (as much as a fantasy writer can).  My brother is a historian, the poor sap, and I’ve reached out to him and a few other folk for assistance, especially in finding a real expert on something I’m pretending to know.

Observational humor aside, it really is great to have access to so many talented and specialized writers.  Toiling in the dark does have that romantic flair, but after the first fifteen minutes, it starts to hurt your eyes.
Posted by RobRoy McCandless at 3:00 AM No comments:

A Shot In The Arm


This was in my email inbox this morning:
It was quite a shot in the arm.  This means that, to date, I’ve sold 37 copies.

When Wild Child Publishing picked up my book, Tears of Heaven, for publishing, I didn’t have high expectations for it.  The book is entertaining.  You’ll laugh, you’ll cry, it’ll become a part of you.  But cases like J.K. Rowling, where the first book out of the gate is picked up, goes viral and turns into a social phenomenon earning the author untold billions are known because they are so rare.

There are some excellent books, books that are even better than Harry Potter and the Neverending Cash Cow that you (and I) have never even heard of.

But I did talk about goals with my editor, and I arrived at some reasonable expectations.  These were things that I could work toward and consider myself and my book “successful”.  I kept the list simple:

Thirty positive reviews may seem arbitrary, but this is a real milestone.  Amazon (or rather its algorithms) will start to take notice in the title.  They’ll add it to the carousel where it says, “Customers Who Bought This Item Also Bought”.  So when you’re out buying Patrick Rothfuss’ The Wise Man’s Fear, there’s a very slim possibility that you’ll also see Tears of Heaven.

Unless, of course, you’ve already bought it.  Then Amazon’s algorithm is more likely to show the book because, well, it’s exactly the kind of book you would apparently buy.

And you’re clever for doing so.

One-hundred books is a nice, tidy number in itself.  But it also has meaning.  It’s half-way to seeing my book released to print.  If I hit 200 ebook sales, actual trees will be harmed in the making of a small box books with my name on it which you can then put on your shelf right next to the copy of Nine Heroes: Tales of Heroic Fantasy.

Remember, they make wonderful Easter gifts.
Posted by RobRoy McCandless at 3:00 AM 2 comments:

And Into A Watery Grave II


Another excerpt from my upcoming short story.  Enjoy:

“Now Jurgen,” Aubrey began, shot her hand through the gate’s bars as fast as she could and grabbed the man’s coat.

Aubrey pulled him hard into the metal bars and drew one of her Manton pistols.  Jurgen slammed painfully against the gate with a grunt, his rifle pinned between him and the metal gate.  Aubrey kept a firm grip on his coat and pushed the barrel of her Manton under his chin.  The other three men behind the gate immediately leveled their rifles at her.  Her own officers responded by aiming their blunderbusses.

This was a bad situation, and could quickly go from stand-off to bloody in moments.  If Aubrey had the time to send a message to Rothchilde and assure him of her good faith, that would have been one thing.  The night was already deepening, and she could feel the danger in the air.  The pleasantries would have to be damned.

“What were you at Cimarron?” she asked him.  “A corporal?  You seem like a brave man.  Should we put it to the test?”

Jurgen starred at her, but made no reply.  She kept the smile on her face, as if she had all the time in the world, but silently cursed the man for his obstinacy.

“In the Empress’ name,” she said slowly, calmly and loudly enough that everyone could hear her, “order your men to open this gate, or I will open two new holes in your head.”

Jurgen stiffened and tried to pull away from her.  Aubrey braced her feet, but let him get a few inches from of distance before she jerked him back against the metal bars a second time, rattling the ornamental ironwork tops.  She pushed the barrel of her pistol up harder against his chin, so that he had to lean his head back.

“Can a dead man pay your wages?” Aubrey hissed at him.  “Is it worth your life?”

Jurgen looked down at her, and the anger and fear washed away.

Posted by RobRoy McCandless at 10:15 AM No comments: