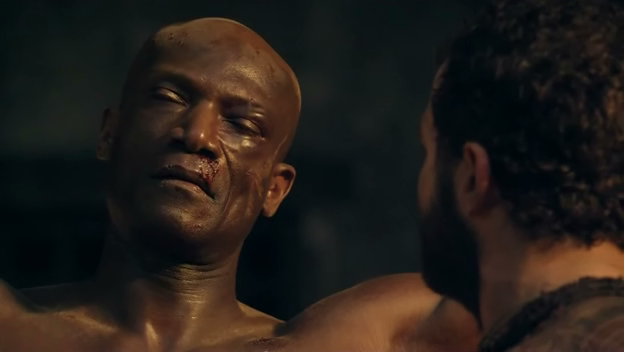 Following is a scene from the heroic fantasy I'm working on Blood of Heroes.  Special thanks on this scene goes out to Dr. Bell, whose experience and insight added every bit of flavor and gravitas this scene has:


“Ahh, yes,” Calin replied, then winced in pain, his hand going to his side as his face tightened with effort.  He stayed that way, breathing through clenched teeth slowly.  Two long lines of tears streamed down his face, but he made no other sound.  At last he opened his eyes and relaxed.  “The reason I’m here at all, instead of lying out there.  They were so damned fast, strong, relentless.  I’ve never seen anything like it.  I don’t know how they got in the Caverns, or why the alarm wasn’t sounded sooner.  I suspect some treachery, though I can hardly think it of any of the brethren that I helped train.  Yet, it seemed they were among us before we even knew.  The main entrance was taken immediately, and I thought we would see other forces pouring through the corridors, that the daemons had been used as shock troops and screaming Vik would follow.  But it was just daemons, and they were enough.”

He looked from Orion to Ramuh, and back, then nodded his head once.

“There is much too tell.  Too much,” he gave a slight groan, but the pain went quickly.  “I’ll give you what I can, as time permits.  We could only make imperfect stands, half-formed shield walls, and half-used defenses that they tore through like paper.  I was forced back here, split from the other masters, and cut off from any reinforcements that might be had.  But here I felt we would finally hold.  I watched as they shattered the door, tore the portcullis from its moorings.  Then they were among us.  We fought them, and held them.  I was damned proud of those that stood with me in the shield wall.  Adepts and aspirants, they were, but not one of them took a step backward when the daemons came screaming and the blood flowed.  Not one so much as swayed in the line.  They knew their duty.”
Posted by RobRoy McCandless at 8:15 AM